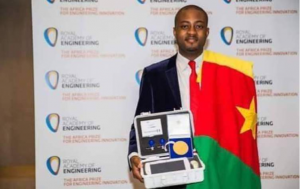 29 years millionaire in Euro thanks to his invention, the “Cardiopad”

Do you know Arthur Zang? This young Cameroonian engineer of 29 years who revolutionized the Cameroonian medicine by adapting it comfortably to this new era of digital.

This electronics enthusiast conceived two years ago “the Cardiopad”, a medical tablet, the first in Africa. You didn’t know? Now you do!
The objective of the “Cardiopad” is to remotely transmit the results of a patient’s examinations to cardiologists. It saves a lot of time especially for landlocked areas that encounter some distance-related difficulties to be diagnosed quickly. The project has recently launched its marketing phase.
The device which was in the test phase since 2014 quickly accused results in line with the expectations of its creator. According to him, a few hundred tablets are produced every week. A challenge he vowed to honour with his team in order to reach the extent of Cameroonian territory.
At first glance, the tablet gave a pretty simplistic appearance but make sure it really does its little effect. At the CHU of Yaoundé and in the small hospital of Mbanjomi a few tens of kilometers from the capital, the Cardiopad showed what it was capable of.

For the health authorities of the country, the Cardiopad facilitates the difficulties that were linked to this medical specialty which studies the heart and its anomalies. In Cameroon, there are no more than 50 cardiologists for 23,440,000 inhabitants. You will agree with me that there is a rather stout lag. In order to find partners likely to finance the project, the young prodigy had made a video that was watched several thousand times. One day, the video ends up falling into the hands of the administrative authorities of the country who will soon be shown to the President of the Republic. Paul Biya eventually put in his possession a budget envelope of 45 000 euros without counting the support of 48 000 euros from the Rolex Foundation at the prestigious Rolex Awards. The Cardiopad kit costs today 2 million FCFA and sells mainly online. It consists of a tablet and all the elements necessary to carry out a cardiac examination of which the sensor, the multi-input cable, princes, Electrodes, a keyboard, a mouse and a solar panel to charge the unit’s battery in the event of a power outage.

The next project of the young Cameroonian is to design a device for ultrasound of pregnant women. Like what we just need to have a dream and crazy desire to realize it and the trick is played.