After the Nobel Peace Prize in 2011, the former president of Liberia received the Mo Ibrahim Foundation Award for good governance and was the first female president in Africa.

Back on the course of this exceptional woman:

-Born in Liberia, she left for the USA at her 17 years to continue her studies,

– Master in public administration obtained at Harvard in 1971

– She goes to the United States, continues her career in the financial field by working as an economist for the World Bank and Citibank

– Ellen Johnson Sirleaf was invested president of the Republic on 23 November 2005. She is the first woman elected to the presidency of an African country

– After two mandates, she left the power to George Weah, his opponent whom she defeated from 2006.

– 2018, she received the Mo Ibrahim Award for good governance. 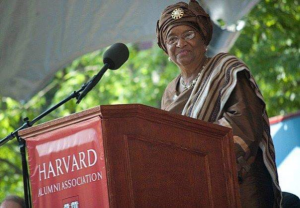 Bravo to this Iron Lady.